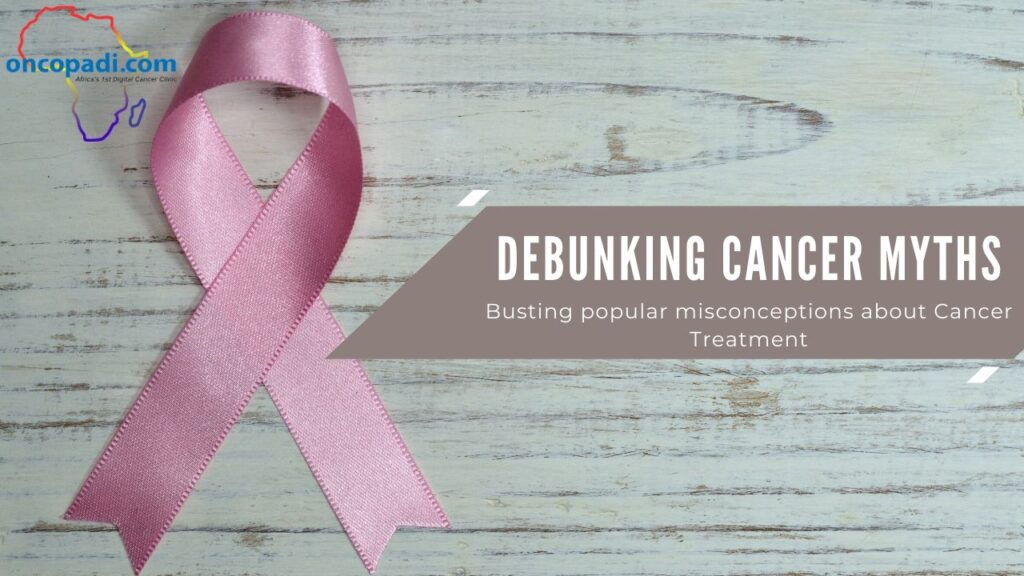 For someone who hardly packs what she needs when going to see family, I received a rude shock when I was told there was no antiperspirant at home, why? My mum heard it causes cancer.

For someone spending her hard earned money on medical fees for me, I was sad she could take such a drastic decision without checking in with me first. If we keep taking opinions like this as the truth, it would not be long before we can’t enjoy the good things of life without the fear of having cancer. A myth is a widely held but false belief or idea that usually stems from an ancient culture or tradition. Throughout the centuries, many health myths have arisen. Some are tried, tested and taken as a fact, while others are nothing but fantasy. A cancer diagnosis does not indicate that one is suffering from an incurable disease where death is inevitable. However, factors like late diagnosis and wrong treatment options may yield unwanted results.

Here are some the common misconceptions concerning cancer:

Myth 1: Cancer is a death sentence

This is the single most important myth we need to get rid of. Unhealthy habits might kill one faster than cancer would. Thanks to technology and groundbreaking researches, the survival rate for most cancers have gone up significantly. There is a better prognosis when they are discovered early. When a diagnosis of cancer is made, try to keep your hopes alive, there is always a fighting chance. Whether you would die from that cancer is dependent on a lot of factors, many not directly related to cancer. One of these very important factors is the fact that early diagnosis of cancer most times will give a better prognosis.

Hello, sorry, what did you say??

Many cancers are familial but you can’t get it from touching or living with someone who has cancer. Even lung cancer is not transmitted via droplets, not even organ transplant. However, surgeons avoid using organs of patients with a history of cancer as some viruses that cause cancer (like HPV) can be transmitted from one person to another but cancer is not contagious.

Myth 3: Electronic devices like cellphones, laptops can cause cancer.

Cancer is caused by genetic mutations, and cell phones emit a type of low-frequency energy that does not damage genes. Doctors at the Danish Cancer Society monitored 420,000 mobile phone users in Denmark from 1982 to 1995 and found no cancer link. Many other studies have been done and none have found any evidence of a connection between mobile phone use and cancer. You still are not convinced? Avoid its use for extended periods but do not cut it out completely. No laptops do not cause testicular cancer, let’s worry about low sperm count before cancer.

Myth 4: Using Microwave can cause cancer

Similar to the phone myth is the microwave myth. Microwaves heat food using electromagnetic radiation which is too low to cause cancer. The food is safe to eat and the radiation is contained within the oven. However, it is advised that you use it according to instruction and use only microwave-safe containers in a microwave.

There was a period when messages about drinking water from plastic bottles left in cars or hot places increase one’s chance of developing cancer. If you still believe this, you obviously are still on the same messaging platform with my parents. Yes, water left too long in bottles might change the taste and might even become a breeding site for microorganisms if they have been exposed to air previously. No, substances won’t sip out of the bottle when it is heated to give you cancer if you drink that bottled water.

This particular myth has people walking around with smelly armpits in a bid to prevent cancer yet inconveniencing the nostrils of the innocent public. The National Cancer Institute has not found any conclusive evidence linking the chemicals typically found in antiperspirants and deodorants with breast cancer. Your breast is safe, keep the atmosphere safe, also, use deodorant before you step out today.

I am all for throwing out Bras entirely, but the reason is that they make me uncomfortable not due to my fear of cancer. Many believe that underwire bras are bad for your breasts and the cells They believe that the underwire will restrict the cells and cause mutations, abnormal growths or block the lymphatic drainage. Due to the widespread fear, many studies were carried out. The American Cancer Society has categorically refuted the claim that wearing a bra could increase your risk of cancer. A 2014 study showed absolutely no link, the researchers had women who did and didn’t wear all types of bras, checked for breast cancer in the future and there was no difference. Wear whatever bra you like or like me, let it go but please, let go of the notion that underwire bras or bras, in general, are potential cancer breeders.

We sometimes like to believe men have chest and not breast. It is important to note that they have breast tissue also and as such can develop breast cancer (Gynaecomastia). Although the percentage, when compared to females, is quite low, the severity is pretty much on the same level.  Dear Men, please check your breasts today. You are not immune to developing breast cancer.

Myth 9: Take Sugar and sweeteners out of your diet

How do I eat donut if I had to take out sugar from my diet? I should throw my cereal out too. Taking out sugar is like taking out the joy in everyday meals. Yes, sugar is linked to a number of non-communicable disease which increase the risk of having cancer, but this itself is by no fault of the sugar but more about how your body reacts to sugar. No, sugar it is not a direct cause of cancer.

Saccharin was found to cause bladder cancer in rats but it has been evaluated and a conclusion has been drawn, that it doesn’t cause cancer in humans, there is also no evidence that artificial sweeteners like aspartame, sucralose and steviol glycoside or ‘stevia’ cause cancer.

Myth 10: Vaccines can weaken your immune system and make you susceptible to cancer.

Vaccines prevent diseases by exposing the immune system to small, often inactive, amounts of infectious material that help it recognize the real disease when it comes along. There is no link between vaccines and an increased risk of cancer. Cancer patients can’t receive vaccines when undergoing treatment, since their immune systems are usually weakened by these therapies and vaccines require someone to have a functioning immune system in order to work properly.

Myth 11: Urine therapy as a cure for cancer

Urine therapy refers to the use of one’s urine as a kind of treatment for various forms of illnesses. The idea that urine could serve as a medicinal aid for cancer treatment is completely FAUX. probably stems from the act that there are certain tumour proteins present in the urine of cancer patients. It is important to note that drinking your own urine or someone else’s cold pose some threats to your normal state of health. Your body is home to many different colonies of healthy bacteria and the urinary tract contains different types of bacteria. Drinking urine can cause gastrointestinal problems or other infections and re-introduce already filtered out waste products back into your system. Drinking urine could alter the dose of medication you are on can also introduce foreign substances into the bloodstream.

Now that you know the truth, spread the word.

Do you still have more enquires about cancer? Visit our telemedicine platform on www.oncopadi.com to book an online video consultation with our specialist or use our free chat platform to chat with our health professionals.

Until the next episode. Remember: “Myths are pulic dreams ”…#Keep informed.